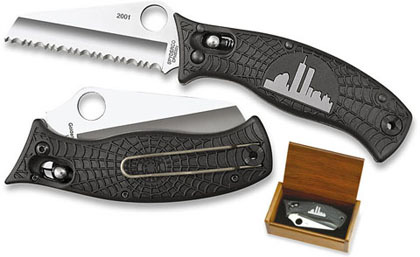 WTC OUT OF STOCK

The tragic events of September 11, 2001 had a profound impact on the character of the United States. In addition to forever changing our way of life, they inspired one of our most unique knives ever produced: The Spyderco World Trade Center Knife.

Created in memory of NYPD Officer and Spyderco enthusiast John D’Allara, who was among the lives lost that day, the Spyderco World Trade Center Knife was developed to pay tribute to the victims and raise funds to benefit the loved ones they left behind.

The goal of the World Trade Center Knife project was to produce one knife to honor the memory of every life lost on that tragic day. All profits received for the sale of those knives was donated to the New York Police and Fire Widows and Children Benefit Fund. In the unlikely event that any of the World Trade Center knives had manufacturing flaws, Spyderco produced a limited number of extra knives to accommodate warranty or repair issues. These additional knives have remained in our archives until now.

To commemorate the fourteenth anniversary of September 11th, Spyderco is making all remaining World Trade Center Knives available for purchase. All sales of these knives will be made at the price of $400 per knife and the majority of the proceeds will be donated to 9/11 Memorial charities. Fewer than 100 of these knives remain in Spyderco’s archives and will be offered only while supplies last.  Each knife is numbered and will include a letter of authenticity addressed to the purchaser using the bill to address.

Please join us in honoring the memories of those lost on September 11, 2001 and keeping them in our hearts forever.